Thursday 4, during the International course of 2013 FAES Campus Hugh Thomas: "Europe and the euro will only be saved if they join power and projects" 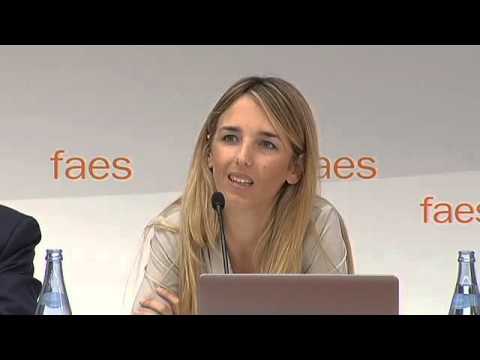 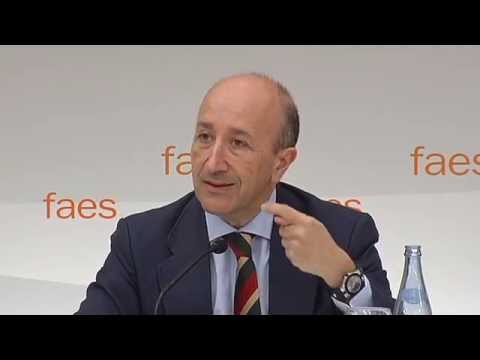 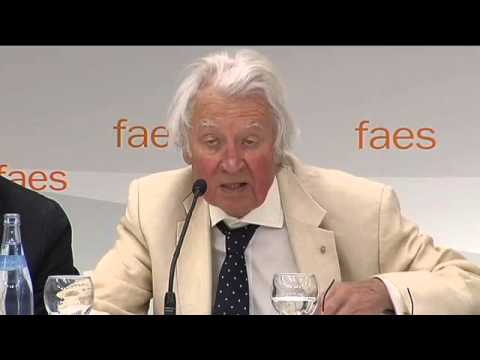 _ Álvarez de Toledo: "Neither Europe nor Spain can be understood turning our backs to or setting apart the Atlantic"

British writer and historian Hugh Thomas has taken part in the International course of 2013 FAES Campus on Thursday, July 4.During his presentation, entitled 'Europe in uncertain times', Thomas said that "Europe and the euro can only be saved if they join powers and projects." "We are facing a tough time in Europe because of the relative failure of the currency, which has not been able of getting properly established in all countries, countries which are a confederation rather than a federation," Thomas said. He added, however, that "the European Union will approach a structure similar to a federal one, just the opposite of something invasive."

In this sense, the Hispanist scholar noted that the European project "may get excellent contributions, whatever its structure, if it thinks on its relationship with the American States, with Asia and Israel as international archipelago of the free world". Therefore he insisted on "focusing on Spain's relationship with the countries of Latin America and across the Atlantic". Thomas also said that "it must be remembered that in all these plans, anti-European populist movements do not get results" and noted, referring to Catalonia, the Basque Country and Scotland, that "they must also think about independence and their future relationship with the European Union."

THE UK IN EUROPE

Throughout his speech, Hugh Thomas has said that, with regard to the UK's relationship with Europe, "in Britain we need the advice of the Spanish" and stressed that "what future generations will be surprised about is that in Spain there wasn't much debate, in Britain there was indeed, but here everyone agreed that membership of Europe would certainly be advantageous".

Regarding the current situation of the UK with the European Union, Thomas said that "we are living in difficult times regarding Europe." "Opinions are divided on Cameron's coalition government. Liberals are in favour of the European Union, the youngest and brightest of the conservatives are sceptical and openly express their doubts, and Labour thinks the public has the right to a referendum, but the Conservatives have made the proposal so no one knows what they would vote", he summarised. On the other hand, he added that "historians say that the European Union is destroying our lives, undermining legal British traditions and eroding parliamentary sovereignty". In this context "Cameron will have to make an effort to decide what aspects he wants to review and explain how it will benefit all of us."

As Thomas said at the beginning of his presentation, "History's accidents explain current situations and, in this sense, the future is always determined by the past." Therefore, the writer has started with a comparison of Spain and the UK's attitudes before their idea of Europe and reflected that "the history surrounding us is very similar", although there are differences." This explains our attitudes before the challenges and opportunities conveyed by the European Union right now and the reasons for the differences in our reactions."

In his view, the background that explains the British approach is that "all preceding organisations in which we have participated included the UK. We are not used to work as we do now, in an organisation whose rules we have not helped to draft." In this sense, Thomas has said that now, just as when Keynes attacked the Treaty of Versailles, "England continues being at the gates of Europe."

SPAIN AND THE ATLANTIC

During Hugh Thomas' presentation, the head if the International department of FAES Foundation, Cayetana Alvarez de Toledo, highlighted the key lessons of the historian. The first one is that "against the natural tendency to self-critical despondency and also against the stereotypes on Spain said from the outside, Spain is not and has never been different in the pejorative sense of the word". "Spain is a great nation that for centuries has been able to overcome and achieve very great goals and challenges thanks to their own abilities, to their strength, initiative and the imagination of its entrepreneurs and the vision and courage of their leadership when posed before major historical objectives," she declared.

In the second place, Álvarez de Toledo has emphasised that "Neither Europe nor Spain can be understood turning our backs to or setting apart the Atlantic", since "Spain was forged as a nation five hundred years ago coinciding with the colonisation or conquest of America; as a modern political nation with the Atlantic; with Spaniards from both hemispheres participating in this project of freedom which was the Constitution of Cadiz; and which also reached its peak of prestige and prosperity hand in hand with a government that decided to recover Spain's Atlantic vocation from 1996 to 2004".

Furthermore, the MP Miguel Angel Cortes has also referred to the interest of the British writer "not only regarding the European part" but "also the entire Hispanic world beyond the Atlantic." He also highlighted that Thomas "is not only a historian but a politician who throughout his career has paid great attention to ideas."